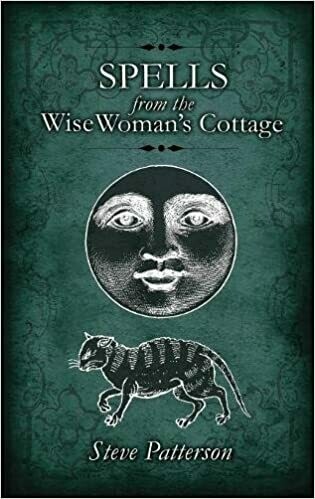 Spells From The Wise Woman's Cottage by Steve Patterson

Deep within the winding corridors of Boscastle's Museum of Witchcraft and Magic, a low humble door and two small windows allow visitors a glimpse into another world. Here, a kindly old woman sits at her table within the whitewashed rough stone walls of her cottage. A small fire glows in the large open hearth, strange substances, herbs and magical charms adorn the shelves and hang from the low wooden beams, whilst in the shadows, various creatures lurk and keep her company: for this is the cottage of a wise woman of yesteryear.

The wise woman, or Old Joan as she is known, speaks to her visitors of the ways of her trade, reciting many traditional 19th century charms and spells along the way that were once a feature of life in the small villages of Devon and Cornwall.

In Spells from the Wise Woman's Cottage, folklorist Steve Patterson gives us these very charms and spells, and guides us through their history and meaning.

The cottage tableaux itself, the history of its construction, artefacts, and the fascinating stories behind the genuine familiar spirits who reside there are all revealed within the pages of this book.

The trade and character of the working witch through the Ages is thoroughly explored, as is the role of the museum in the world of witchcraft and its revival, along with the 'wayside witches' whose artefacts, magic and wisdom were so central to the museum's foundation.