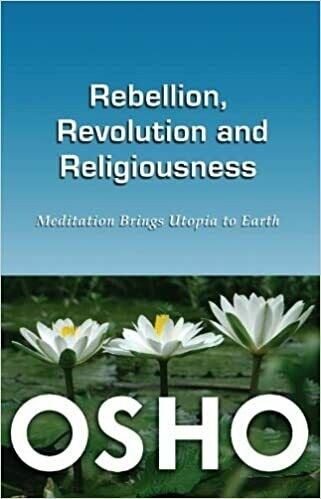 Rebellion, Revolution and Religiousness by OSHO

"Rebellion is individual action; it has nothing to do with the crowd. Rebellion has nothing to do with politics, power, violence. Rebellion has something to do with changing your consciousness, your silence, your being. It is a spiritual metamorphosis. And each individual passing through a rebellion is not fighting with anybody else, but is fighting only with his own darkness. Swords are not needed, bombs are not needed; what is needed is more alertness, more meditativeness, more love, more prayerfulness, more gratitude. Surrounded by all these qualities you are born anew." -- Osho

"My rebellion is life-affirmative. I want you to dance and sing and love and live as intensely and as totally as possible. In this total affirmation of life, in this absolute yes to nature, we can bring a totally new earth and a totally new humanity into being." -- Osho

"Rebellion, Revolution and Religiousness is a book about spiritual rebellion which arises out of meditation, awareness and freedom, and from truly being yourself. It is not a rebellion against someone or something outside of yourself, but rather against all that is false within you. It is an inner rebellion, or the rebellion of the enlightened. All enlightened Masters, from the Buddha to Osho, were rebels to the core, and their rebellion became their religion." -- David Cherubim

This second edition of the book was proofread by David Cherubim.