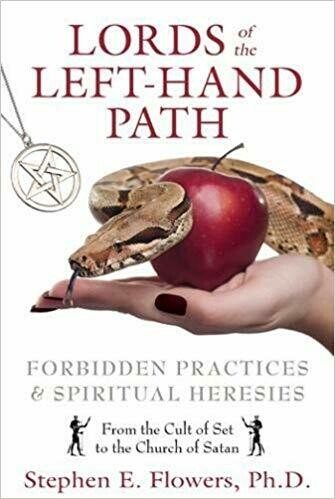 Lords of the Left Hand Path by Stephen Flowers

From black magic and Satanism to Gnostic sects and Gurdjieff’s Fourth Way, the left-hand path has been linked to many practices, cults, and individuals across the ages. Stephen Flowers, Ph.D., examines the methods, teachings, and historical role of the left-hand path, from its origins in Indian tantric philosophy to its underlying influence in current world affairs, and reveals which philosophers, magicians, and occult figures throughout history can truly be called “Lords of the Left-Hand Path.”

Flowers explains that while the right-hand path seeks union with and thus dependence on God, the left-hand path seeks a “higher law” based on knowledge and power. It is the way of self-empowerment and true freedom. Beginning with ancient Hindu and Buddhist sects and moving Westward, he examines many alleged left-hand path groups, including the Cult of Set, the Yezidi Devil Worshippers, the Assassins, the Neoplatonists, the Hell-Fire Club, the Bolsheviks, the occult Nazis, and several heretical Sufi, Zoroastrian, Christian, and Muslim sects. Following a carefully crafted definition of a true adherent of the left-hand path based on two main principles--self-deification and challenge to the conventions of “good” and “evil”--the author analyzes many famous and infamous personalities, including H. P. Blavatsky, Faust, the Marquis de Sade, Austin Osman Spare, Aleister Crowley, Gerald Gardner, Anton LaVey, and Michael Aquino, and reveals which occult masters were Lords of the Left-Hand Path.

Flowers shows that the left-hand path is not inherently evil but part of our heritage and our deep-seated desire to be free, independent, and in control of our destinies.