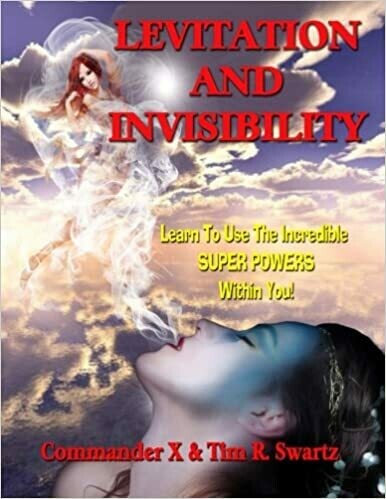 Levitation and Invisibility by Commander X

SKU 400000038056
$21.95
In stock
1
Product Details
CAN WE LEARN TO FLY THROUGH THE AIR WITH THE GREATEST OF EASE?IS IT POSSIBLE TO WALK THROUGH WALLS OR OTHER SOLID OBJECTS?YES! Says A Former Military Intelligence Operative, An Emmy Award Winning Journalist As Well As Numerous Saints And Mystics. Now You Can Learn To Unleash The Super Powers Of Invisibility And Levitation!Out of all the magical secrets that mankind has sought over the ages; probably the two most universal desires would be the ability to become invisible and to fly, or levitate at will. Countless spells, incantations, potions and talismans have been created, all with the purpose to achieve the goals of invisibility and unaided flight.Now thanks to Tim R. Swartz and retired military intelligence operative Commander X, working in tandem with various sages, shamans and adapts, we are happily prepared to proclaim the secrets to fulfilling these mystical “dreams” are at hand. This mind blowing – and mind stretching – book reveals the most astounding information on these extraordinary concepts. Contents Include:++ The Quest For Instant Invisibility.++ What Is In The Mysterious Mist?++ The Realm of Invulnerability.++ Prayers and Spells For Invisibility.++ Spiritualists And Mystics Who Have Proven TheyPossess Incredible Talents.++ How You Can Learn The Art Of Levitation.++ How To Make The Most Out Of These “Eerie” Talents.++ Invisibility And Levitation As A “Science.” Not to be used for unlawful or immoral purposes! Commander X has seen this from a military point of view and knows the Top Secret projects the government and military is working on.You will be amazed!You will be convinced! And now you can attempt such “feats of magick”on your own. Totally safe to practice.
Save this product for later
Display prices in: USD