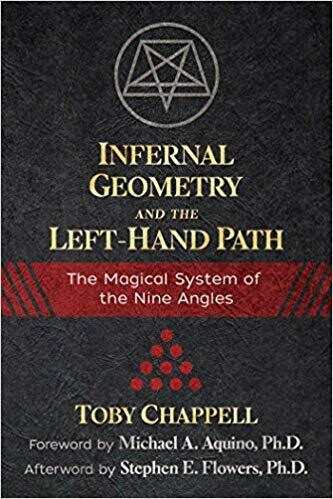 Infernal Geometry and the Left-Hand Path by Toby Chappell

Revealing the magical uses of number and geometry as tools for introspection, self-development, and creating change in both the inner and outer worlds, Toby Chappell explores the rites, history, and potent practices of Angular Magic and Infernal Geometry, the Left-Hand Path of Sacred Geometry.

Focusing on the advanced magical system of the Nine Angles, he details the system’s development by the early Church of Satan and later the Temple of Set, as well as its internal body, the Order of the Trapezoid. He shows how the system first emerged in the Ceremony of the Nine Angles, written by Michael Aquino and published in Anton Szandor LaVey’s The Satanic Rituals. He explores historical influences on Angular Magic, including Pythagorean number mysticism, John Dee’s Enochian magic, the theories of William Mortensen, and, most importantly, the writings of H. P. Lovecraft as well as other contributors to his Cthulhu mythos.

The author analyzes the 3 key rites of Angular Magic: Die Elektrischen Vorspiele, the Ceremony of the Nine Angles, and the Call to Cthulhu, expanding upon them to demonstrate how readers can craft their own rituals. He examines the Nine Angles individually, detailing their keywords, powers, and related deities, and explains how each can be used in magical practices and as part of an ongoing initiatory process. He offers practical examples, including use of Angular Magic in divination, sigils, and magical symbols, and guidance on creating your own practices--a core component of the ever-evolving Left-Hand Path.

Offering a self-directed path of magic and empowerment, previously unavailable to those outside the Temple of Set, Chappell shows how the Nine Angles must be worked with and experienced personally in order to effect true transformation and change.

Guidelines for inside service during our regular hours: Face coverings are required and up to 6 customers at a time. Children 6 years and older are welcome inside with face masks worn. Curbside pickup and mail order are also available.