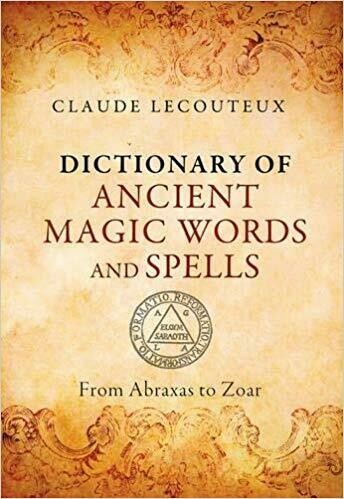 Dictionary of Ancient Magic Words and Spells by Claude Lecouteux

From Abracadabra to the now famous spells of the Harry Potter series, magic words are no longer confined to the practices of pagans, alchemists, witches, and occultists. They have become part of the popular imagination of the Western world. Passed down from ancient Babylon, Egypt, and Greece, these words and the rituals surrounding them have survived through the millennia because they work. And as scholar Claude Lecouteux reveals, often the more impenetrable they seem, the more effective they are.

Analyzing more than 7,000 spells from the magical traditions of Europe as well as the magical papyri of the Greeks and recently discovered one-of-a-kind grimoires from Scandinavia, France, and Germany, Lecouteux has compiled a comprehensive dictionary of ancient magic words, phrases, and spells along with an in-depth exploration--the first in English--of secret magical alphabets, including those based on Hebrew letters, Kabbalistic symbols, astrological signs, and runes. Drawing upon thousands of medieval accounts and famous manuscripts such as the Heptameron of Peter Abano, the author examines the origins of each word or spell, offering detailed instructions on their successful use, whether for protection, love, wealth, or healing. He charts their evolution and derivations through the centuries, showing, for example, how spells that were once intended to put out fires evolved to protect people from witchcraft. He reveals the inherent versatility of magic words and how each sorcerer or witch had a set of stock phrases they would combine to build a custom spell for the magical need at hand.

Presenting a wealth of material on magical words, signs, and charms, both common and obscure, Lecouteux also explores the magical words and spells of ancient Scandinavia, the Hispano-Arabic magic of Spain before the Reconquista, the traditions passed down from ancient Egypt, and those that have stayed in use until the present day.